When I’ve tested the previous bridge model from SONY, the HX300 (here is the review in Romanian), I concluded the camera raised to the expectations and beyond.

I could not think that a new camera to follow this model, in this case the new SONY HX400 could improve more on what could be done with an ultra-zoom.

I say “improve more” because you can always come out with marketing stuff like more megapixels or higher ISO values on cameras that this kind of “features” are useless considering the small physical size of the senzor, which is only 1/2.3 of an inch.

SONY is not trying to foul its users in this case, but to really improve a camera considered by many an excellent bridge ultra-zoom. 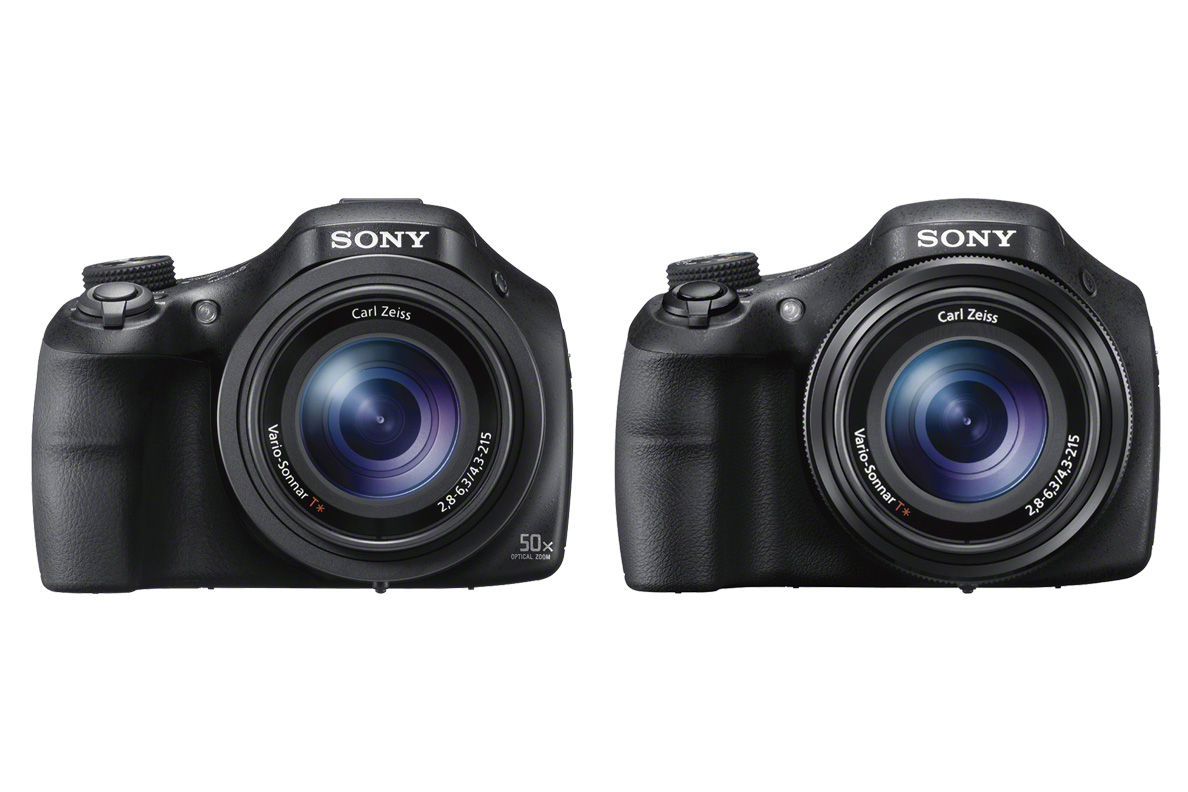 I let you find the differences between the two models 🙂

I’m kidding, of course. Watching them from front, you could barely see differences between the two (left the HX400, right the HX300). With a closer look though, we could see a small bump on top, which corresponds to the Multi Interface Shoe. The zoom ring is now smoother and on front there is a small logo with the optical zoom power.

Looking at the back of the two cameras, there are no major differences, but one important “tool” is present, thankfully. The EVF sensor which detects the proximity of the user’s face and switches automatically between LCD and EVF. The hot-shoe is better seen here. It looks also that the rubber from the thumb grip was changed, having a better porosity, so theoretically (and in practice also) the camera is better to hold. HX300 had an excellent grip, and its successor its even better.

Only when you look from above you see that the cameras are different, the new model looking way better in my opinion. The general design of the HX400 developed into a better product, getting it closer to the more expensive RX10 model (here is the review I did, also in Romanian)

The zoom ring is smaller, better crafted and on the lens body the Zeiss logo has appeared. The buttons are the same on both cameras, but got new and different functions like the most expected Fn button which acts as a quick menu for rapid access to camera’s most used functions. On the Mode Selector there are now two memory positions and the 3D mode disappeared on the HX400.

If you ask me, the ergonomics, the ease of use, the speed a camera performs various actions, means more to the customer than many camera manufactures understand users are expecting from them. It is not the first time SONY listens to his customers and makes steps that, from a marketing department’s point of view, may seem shear suicide , but from the client’s perspective are more than welcomed.

Inside there is a new beast, a completely different one than its older brother grandfather which was the HX300 :). It looks like SONY is trying to unify the menu system of all its cameras, and, correct me if I’m wrong, all the cameras in the new lineup have now this new Menu and user interface. Make no exception, the HX400 have now the same fluent and easy to navigate menu like the one found in, let’s say the a6000 (a camera I loved and a first fo me: the first review in English), completely different than the “chopped” version of the HX300.

Below is a short clip with the new menu, and if you’re interested in a particular menu page, you can pause the clip and get a better look

Speaking of menus, the addition of the most expected Fn menu (Function Menu)  is a big step ahead in functionality and ease of use of the new HX400. I like to use lots of Picture Effects and I find myself always looking to access one of those filters. Now they are at a press of a button distance.

HX400 has a total of 13 effects and most of them have different settings to choose from (intensity, tone, colour, region etc.), compared to the HX300 which only had 9 effects and if I remember correctly with no customisation.

I could spend an entire day outside and “paint” with the Illustration Picture Effect which I love most on all SONY models that incorporates it.

Having the same Exmor R CMOS type sensor as the previous model, we couldn’t say the same thing while talking about the processor inside, an item that makes a difference to the sky and back in terms of speed and multitude of new software functions.

Of course we speak about the already well known BIONZ X image processor we can find in top cameras like the A7/7r (see the review, also in English) or the a6000.

The processor alone is responsible of lots of improvements of the HX400. This is what came into my mind while writing this review:

I’m pretty sure you’ll find yourself more goodies if you’ll own an HX400 which if I remember correctly has been launched at the same price as the HX300 was when announced. (check price here or here or here)

And as a last find, I give you a good trick to save some juice: you can set to Finder/Monitor switch method to Manual instead of letting the proximity sensor handle that. Then, switch to EVF and the sensor will do a neat trick: it will keep the EVF off while not close to your eye, saving this way great battery usage. The engineer which implemented this was a Genius 🙂

It seems that the lens itself was modified inside and even if HX300 had also Carl Zeiss lenses inside, the new model comes with an improved formula. Precisely we are speaking about a ZEISS Vario Sonnar T* with 15 elements in 10 groups, including a superED element, two ED elements (extra-low dispersion) and 3 aspherical elements. All of this translates also into improved image quality.

I had a shock when I’ve first tested on the HX300 what a 50x zoom means, and the shock is still here to see 1200mm coming from such a “small” lens (comparing to its 35mm equivalents).

Here are some photos exemplifying these focal lengths

When I did test the HX300 I’ve mentioned and explained what is the “mirage effect” on huge tele zooms. I will do it again with the HX400 to let readers know that what may seem an image quality issue is actually this natural phenomena in effect.

Mirages are optical phenomena in which light rays are bent due to thermal variations in the refraction index of air, producing displaced or heavily distorted images of distant objects. – explains Wikipedia

The only chance to get rid of this phenomena is to shoot in cold days with sub zero temperatures 🙂 In this case, the chances for mirages are getting down to zero.

To get in line with the current lineup of SONY’s cameras, the HX400 couldn’t miss the added value of WiFi and NFC functions. When testing the a6000 camera I did a small video tutorial on how to transfer pictures to phones or tablets, how to watch images on a Smart TV also WiFi enabled and also, how to use the Smart Remote function. The steps are the same for the HX400.

What I manage to do the for the first time with the HX400 was to send files wirelessly to my Mac computer, something I didn’t managed to do before. Could be related to the fact that now, when Vaio is gone from SONY, the manufacturer started to add better support for Mac computers. These are the steps to do to enable WiFi Auto Import on Mac:

It’s almost irrelevant to talk about performances  at high ISO values when the camera has a sensor not bigger than a dime. Put in that small surface 20 mpx and you’ll see why is so difficult to get enough details at ISO values higher than 800, as I found to be the usable limit of HX400 (at least for me).

This is how a 1/2.3 inch sensor compare to other and bigger sensors, not to mention the full-frame one

What’s certain is that I didn’t do ISO specific tests with this camera. For sure is not a camera for low light situations even if it features technologies like Multi Frame Noise Reduction or Area Specific Noise Reduction. BIONZ X does wonders even so, considering the small physical size of the sensor.

In some cases though you can go even beyond 800 and get good results, but you must take care about exposure and your photographed subjects. Finer details will disappear due to heavy noise reduction. Below are some examples of photos taken beyond 800.

While noise is barely to be seen, at high ISO values the details are gone.

The small sensor and the big zoom (focal length) bring also other restrictions to the HX400. For example, the minimum aperture you can use is only F8. Maybe, beyond that the diffraction is impossible to manage. Even more, in extreme situation, you can see ugly diffraction artefacts even at F8. Watch the halos around the street-lights.

What’s in the box

For the curious out there I could not do a complete test without an unboxing video :). The camera used to take this clip was the new SONY Handycam PJ810E (soon I’ll review that too).

While building this new ultra-zoom, SONY didn’t do anything about the megapixels, the minimum and maximum ISO values, or to the physical dimensions which are the same as the previous model. But they did lots of improvements “under the hood” and the new model is an example for other manufacturers that you can really improve a camera if you want to, without using the fake marketing “tools”.

This website uses cookies to improve your experience while you navigate through the website. Out of these, the cookies that are categorized as necessary are stored on your browser as they are essential for the working of basic functionalities of the website. We also use third-party cookies that help us analyze and understand how you use this website. These cookies will be stored in your browser only with your consent. You also have the option to opt-out of these cookies. But opting out of some of these cookies may affect your browsing experience.
Necessary Always Enabled

Any cookies that may not be particularly necessary for the website to function and is used specifically to collect user personal data via analytics, ads, other embedded contents are termed as non-necessary cookies. It is mandatory to procure user consent prior to running these cookies on your website.